Imhotep the scholar, “the one who comes in peace” 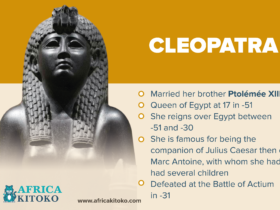 Cleopatra, the last sovereign of Egypt