The Mursi ethnic group is a primitive isolated tribe in the south of Ethiopia, on the banks of the Omo river. Mursi women carry a tray in their mouths. It is a great specialty of this ethnic group.

She is one of the last people in Africa whose women still wear lip and ear ornaments in the form of flat discs, hence their nickname “plateau women”.

The original motivation of this tradition was to become “ugly” to avoid being kidnapped and enslaved by other ethnic groups. The plateau has gradually become the symbol of the courage and beauty of the ethnic group. Around the age of 10, young girls have their lower incisors removed and their lips pierced. This hole is widened over the years by the introduction of small and increasingly large wooden cylinders, until the desired dimension is obtained. This cylinder is finally replaced by a clay tray made and decorated by the one who wears it, which she will proudly display in the presence of her husband and her sons.

The wearing of the plateau is a distinctive sign of women belonging to a higher caste in the tribe, and the width of the plateau corresponds to the size of the dowry required by the girl’s family from the suitors.

Polygamy is usual, but each woman has her own hut, with her children. For the father, having daughters is a rent, each of them representing in terms of dowry a gain of twenty to thirty cows (heritage ensuring the survival of the tribe) and one or two Kalashnikovs!

Among the Mursi, unlike their neighbors (Hamer, Surma, Bona …), women are not excised.

Sexual freedom is the rule for girls until the date of “marriage”, around 16, 17 years old. But having a child from the age of 12 is not unusual! They give birth in the forest, which explains the high maternal and infant mortality. Wives of the same “husband” may live in different villages.

When women reach the age of marriage, they cut their lower lip and insert a larger and smaller labret to gradually stretch it. The labial plateau can reach 20 cm in diameter inserted in their lower lip. Terracotta, these pulley-shaped trays are decorated with various geometric patterns and sometimes painted. The size is commensurate with the dowry required by the family of young girls to marry and their social rank. They wear a loincloth in cow or goat skin and are adorned with necklaces of multicolored pearls or made of shells and iron bracelets (arms and ankles).

“It is said that the lip tray was used to ugly women to dissuade warriors from neighboring tribes from removing them,” advises Benoît Feron. But over time, it has become a symbol of beauty and prestige: the more important the woman is within the tribe, the larger the plateau. “ 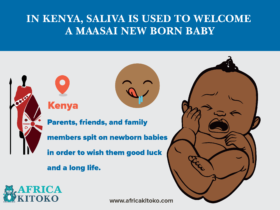 In Kenya, saliva is used to welcome a Maasai new born baby