Scarifications were initiated in order to mark the integration of individuals and to more easily recognize their origins within the black population. There are several signs that make it possible to distinguish between ethnic groups, tribes, or the various levels of the hierarchy.

Among the Baoules in Cote d’Ivoire, in families where the deaths of children are frequent, a triple scarification or « n’golè » is performed on each side of the mouth, at the corners of the lips of the newborn, to identify him  and put an end to the incessant deaths of children. This act is called « nzoliè », that is to say « that which allows to remember or to recognize ».

Among the Gouros, there is a voluntary blackening of the gums, a criterion of beauty in women of this ethnic group which is not, however, mandatory.

In Burkina Faso, there are sub-groups among the Mosse who share the same language (Mooré). Each sub-group has some kind of identity or sub-identity that is expressed on the face through the scars. They are seen through two symmetrical series on each side of the face.- Among the Sissala this mark means that we are in the presence of a twin.

The scarification of the Yombes women of the Congo is an identical sign and was among the most learned and the most beautiful in all Africa.

Among the Karos in Ethiopia the scarifications on the body are considered a sign of beauty and also a mark of function in the tribe. Women wear a clay wooden plate in their lower lips, a practical beauty criterion for finding a husband. During the engagement, the size of the dowry will depend on the size of the bride’s lip plate.

Among Nuba women in Sudan, it is sometimes a mark of physiological status: the diagrams indicate stages such as the onset of menstruation and the birth of the first child. Sometimes the body is scarified for the aesthetic value of the patterns

Various sources report that historically in Nigeria, the practice of tribal markings – or scarification – was used for identification purposes, as people were often separated from family members as a result of kidnappings related to communal conflict or trade. slaves; it had therefore become necessary to mark their faces to show their belonging to a particular ethnic group

In Benin, The different scarifications on the face are made to identify one ethnic group from another from birth – For boys, the scarifications often occur at the time of circumcision – For a girl, it is important to be scarred before marriage – a woman ready for marriage will have a series of scars on her stomach.

The traditional African tunic, an outfit that seduces

The emblematic animals of African countries 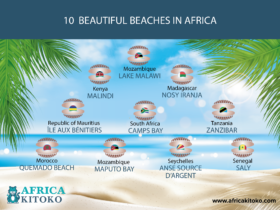